Xi Rao is a research assistant and PhD student in Technology and Humanities at Illinois Tech. She is interested in social media analysis, information design, as well as fan study. She studies and curates Twitter discussions on games such as #1ReasonWhy and #1ReasonToBe.

“The aesthetic of play is merely a set of provisional constraints that allow us to make certain interpretive moves, nothing more. It makes no truth claims about itself, because making a truth claim is a forbidden move within the aesthetic.” – Brian Upton, The Aesthetic of Play (P. 305).

Brian Upton is a professional game designer. He cofounded Red Storm Entertainment, where he was lead designer of the popular games Rainbow Six and Ghost Recon. He is now a “script doctor for games” at Sony’s Santa Monica Studio. Upton has thought about what game design means more than most people ever will. At the Game Developers Conference in 2008, He expressed dissatisfaction with the way that people had adapted literary theory to understand games, saying, “it’s been an uncomfortable fit” (Scalzi, 2015). Therefore, he decided to explain the meaning that emerges from the experience of interacting with game systems. In his book, Upton demolishes the thinking that games cannot be art. The new framework he proposes in The Aesthetic of Play not only gives game designers a lens to create great play experiences, it also enables new insights into what makes for great art.

The first stage in the construction of this framework is to define the words “play” and “constraint.” According to Upton, “play is free movement within a system of constraints (P. 15).” He claims that this definition structures a discursive field that allows people to say interesting and meaningful things about the practice of play. The word “constraint” is quite open-ended. It encompasses formal rules, but it also includes guidelines, suggestions, and inclinations. Anything that privileges one line of action over another is a constraint. 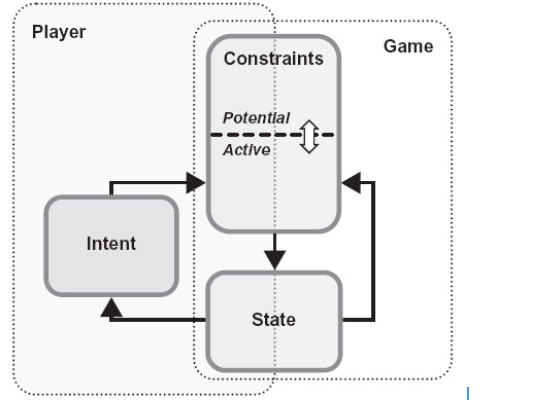 Another term play space is defined by its system of constraints. Upton indicates that the quality of a game is decided by the quality of the play space. To understand how to create a high quality game, he discusses the quality of a play space by analyzing the horizon of intent. Here, Upton proposes six heuristics to describe the characteristics of a good horizon of intent: choice–horizons offer a range of possible actions; variety–horizons aren’t repeated; consequence–actions have outcomes; predictability–outcomes can be anticipated; uncertainty–outcomes aren’t predetermined; satisfaction–desirable outcomes are attainable. Upton argues that a high quality game needs to satisfy these characteristics. This framework is also used later on with discussion on narrative.

In the second part, Upton analyzes how our minds work when experiencing play with three different theories: epistemology, neurons, semiotics. He firstly describes how we understand games: “when we say we ‘understand a game’, that doesn’t mean that we have memorized its rules. It means that we have constructed a set of internal constraints that are sufficient for us to play it (P. 119).” Upton uses epistemology to explain our activities: we don’t play to learn things, rather, we play as an inescapable consequence of being able to learn things. He then points out that aesthetic engagement is navigation through an interpretive play space. We are invited to make sense of what we are seeing or hearing by forming interpretive constraints that both account for what we have already encountered and make predictions about what we will encounter in the future. For instance, when we explore the game Journey, we suddenly realize that we can get bonus to stay with our partner. Therefore, we make predictions that it will be advantageous to be together in the future too.

In the last part, Upton looks at two types of play that manage to successfully show how a play space can be structured without imposing a victory condition: childhood make-believe and adult role-playing games. The constraints of make-believe fall into four categories: roles, characters, props, and situations. He also builds on Edwards’ hierarchy of RPG play (see Figure 2) and renames new agendas: goal-oriented play (gamist agenda), coherence-oriented play (simulationist agenda), closure-oriented play (narrativist agenda). The following two chapters explains narrative play and narrative structure. Upton focuses on texts that are structured for aesthetic effect and looks at the mechanics of how texts function as play spaces. Later on, Upton applies the previous framework to examine particular passages in The Princess Bride using the heuristics of play that he develops in the first part of the book: choice, variety, consequence, predictability, uncertainty, and satisfaction. The story satisfies these dimensions and therefore it is regarded as a play space. In the last two chapters, the meaning of play is discussed as a distillation of strategies that proved effective in response to the challenge posed. Upton argues that some experience we encounter from the game lingers with us and our in-game actions and interpretations have meaning as an expressive medium. These games could have a deep narrative effect on players. 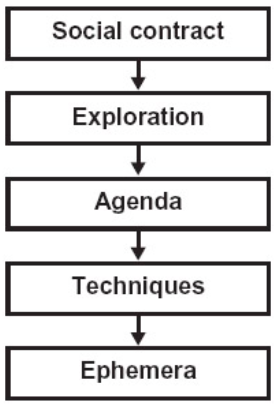 Upton addresses some of the most difficult problems in game scholarship in an enjoyable and highly readable way. His book is a rare type in academic game design and development literature, and it provides a new framework of understanding games that is innovative, accessible, and practical for this evolving medium. He intervenes in a great amount of arguments that clearly separate video games and narratives, such as Aarseth’s (2001) claim that cybertexts are entirely different from traditional linear texts, and Juul’s (1998) “Computer games and narratives are very different phenomena. Two phenomena that fight each other. Two phenomena that you basically cannot have at the same time”, and statement from Ebert (2010) that video games can never be art and “one obvious difference between art and games is that you can win a game.” Upton criticizes these statements. He argues that these claims either understand what constitutes a game with a very narrow conception, or fall into the trap of thinking of narrative as a linear, deterministic experience. And Upton illustrates that gameplay and narrative are combined into a unified aesthetic whole in games. This aligns with what Simons (2007) does, Upton seeks to find middle-ground within the (perhaps now outdated) games and stories. What’s more, a particular strength of The Aesthetics of Play is that Upton argues for the elimination of the distinction between video games (interactive) and novels / plays / music (passive). In this book, each of these media represents a type of “play”, an interaction between the media and the consumer. And the experience we reinforce from the interaction with media is portable and predictable, and has effects on our behaviors in future situations in our both real and virtual life. From this perspective, a game, as a medium, is just like other media, providing us distinctive experiences and narrative effects. With this understanding, games are distinct media, but not that different from other narrative media, despite their more explicit focus on interaction.

His writing is concise and clear, and the gaming examples used are a wonderful mix of classics and less well-known games, such as The Grand Theft Auto, Guitar Hero, Super Mario Bros, and Simon Says. When I read this book, I consider him not only as a game designer, but also a psychologist and philosopher. He analyzes how our minds work when experiencing play with three different theories: epistemology, neurons, semiotics, and he connects each theory well with each other. One thing Upton emphasizes is that he is not talking about what “play” is, but describing how “play” works. And that’s the big difference from other pieces. By extracting characteristics from playing games, Upton ingeniously designs different dimensions of his framework, and applies them to narrative. He avoids the dilemma of defining either “game” or “narrative”, rather, he creates a general framework to evaluate different media. This framework is also great for both designing and evaluating a game.

Ultimately, Upton convincingly argues that to design a game is not mostly about the rules itself, but it is more about the reasons behind the rules and the experience of play that the game can bring to its consumers. The aesthetic of play is the meaning of rules, but it is also how these rules work on the player’s mind, and the play space that rules build in the player’s head. To design a game is to figure out what play space we want to build in the player’s head, and how we want that play space functions. Anyway, Upton provides a neat tool to approach this point and design a great game.

Juul, J. (1998). A clash between game and narrative. Presented at the Digital Arts and Culture. Retrieved from <https://www.academia.edu/1003652/A_clash_between_game_and_narrative
_A_thesis_on_computer_games_and_interactive_fiction>

Upton, B. (2015). The Aesthetic of Play. MIT Press. Retrieved from https://mitpress.mit.edu/books/aesthetic-play